The very name of the Vampire sends a chill down the spine. And the billboards and posters proclaiming “Piercing Done Here” or even “Vampire Piercing” attract the young like flies to an ointment. It is vaunted as the top attraction for Generation Z. The Vampire represents a diabolic figure to the conservative believer, and its bite is considered a hated symbol of domination by the Devil Himself, but to the young and the fashionable the Vampire is a style icon.

Perhaps Bram Stoker’s portrayal of the Count of Dracula, as an ever-young immortal but doomed figure, who leads a never-ending life of tragedy, started this trend amongst the rebellious youth. From time-to-time, our ever independent young chose a desperado as their ultimate figure of escape from drudgery, and into the arms of high fashion. But piercing itself is not in any sense new.

The history of putting sharp objects through the body goes back at least 5000 years, maybe more.
Piercing in ancient times was used to signify extreme wealth, or even to protect body and soul from demons and the Devil. It was done all over the body. Israel had its nose and ear piercings, ancient Africa pierced the lip and the tongue, and the Roman Empire focused on piercing the nipples.

But the Vampire style of bite mark piercings is a modern phenomenon. The Legend of the Undead has become progressively more popular, and now it has spread even to some older generations who are trying to be young.

After the enormous success of Bram Stoker’s Dracula, these legends were further fanned by the famous French film director Roger Vadim (director of ‘And God Created Woman’ as well as discovered Actress and symbol Brigette Bardot).

Piercing itself was very much in fashion in The Roaring 20s. Then it died down but has come roaring back again, on back of the Vampire Legends. It is whispered that it was Bardot who first sported the marks of Vampire bite son her neck. And so began the Vampire Saga.

The History of Piercing 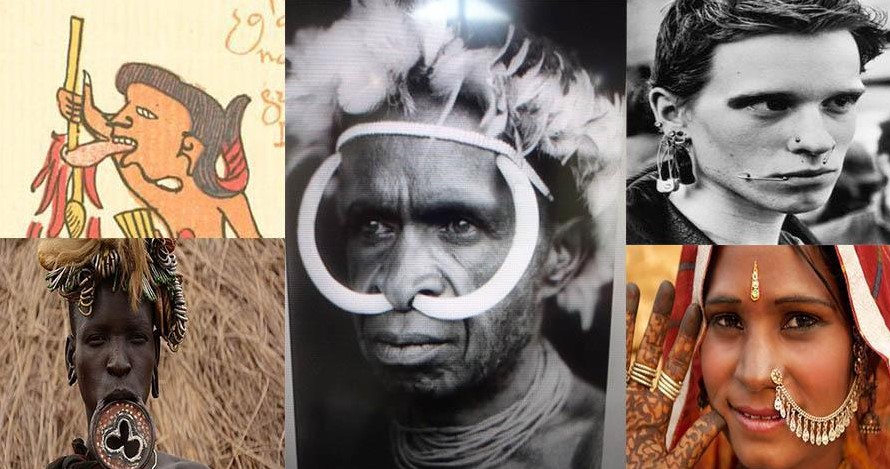 Piercing comes from ancient times. Piercings have been found on the oldest known human mummy. Beautiful people have had a singular attraction towards body piercing, and so have artists throughout the ages. Piercing is a common beauty technique. It is a form of Self Expression that comes to us from ancient times.

Around 5300 years ago, a lady in Egypt, who decided to beautify herself by Piercing, felt sick and died at an early age. Her mummified body, discovered in the 20th Century retained the signs of Nose, Ear, Naval and some other areas of the body that are marks of Piercing. Named Otzi, she was found in 1991.

Next, the Egyptian Boy King, whose reign lasted from B.C. 1332-1323, Tut Ankh Amun, left behind a mummy that displayed evidence of wearing earrings with other body piercings. Julius Caesar, the great Roman, who came 1200 years later, was also a fashion icon during his reign as Emperor of the Roman Empire from B.C. 49-44.

He made ear piercings for men fashionable and advocated all forms of body piercings for women. Then in the late 16th Century, under the reign of Queen Elizabeth I, piercings achieved an imperial height of fashion in Britain and Europe. Not just high born women, but even noblemen had to display their wealth by ear piercings and earrings, at-least in one year. Common people also indulged in the piercings.

Not just sailors but travelers too wore earrings which could pay for their funerals if they died en-route. Death was very common in those days. Primitive tribes have been piercing their bodies for centuries. Body piercings were used then, and are still in use around the world, as identification of the tribe and the person to whom the piercings belonged.

This ancient form of passports allowed travelers amongst them, to go through hostile territory with whose residents peace accords had been agreed on up-on. The piercings also signified coming of age, and the wearing of body ornaments not only increased physical attractiveness but also warded off evil spirits and demons. Piercings have therefore played a vital role in the history of mankind.

The Art of Piercing

Vampire Bites Piercing is classified as Neck Piercings. A Neck Piercing is a series of surface piercings done to create the appearance of a Vampire bite on the side of a person’s neck. The piercing procedure starts with the marking on the neck, where the Piercer intends to make the perforations.

Generally, a Barbell is inserted in the skin of the side of the neck. When the Barbell is removed (sometimes forcibly), the drying wound looks like a Vampire bite. It is common knowledge that Surface Bars are the best ornaments for this type of bite piercings. Dermal Piercing Techniques apply when these are done, and it is more acceptable to use a Dermal Punch. But, this may be painful to some. In that case, a second technique may be used.

Sometimes when piercing a sensitive area and placing a Surface Barbell, a scalpel may be used to create a line in which to nestle the Surface Bar. In a third technique, the Piercer uses a hollow surgical needle for the perforation. A fourth technique uses a combination of the methods above. Before operating, the Piercer must perform proper Skin Preparation, to protect the client from Bacteria or other Microbes and Body Viruses or other Micro-Organisms that may be clinging to their skin. It must be ensured that these Microorganisms are not pushed behind the dermis and given easy access to a person’s bloodstream, where havoc may be caused on the Client’s immune system.

This is also a legal imperative, to protect the Piercer from potential legal recourse, for improper surgical methods. This preparation should include a prior cleaning with an Antimicrobial Detergent or Skin Cleanser. Then use an Antiseptic – Surgical (CDC Approved).

If the procedure is painful, or if the Client demands it, a Topical Anesthetic should be applied between fifteen to thirty minutes before the Skin Preparation process is begun. Any Topical Anesthetic leftover after skin absorption is washed away.

There are certain risk factors and complications that might amplify a Client’s probabilities of skin infection development after the piercing. Particularly, some Clients may be at higher risk if the Client has an existing immune system deficiency, illness or infection. Diabetes, Severe Obesity, Smoking or Malnutrition increases the chances of infection.

A Piercing Aftercare regime must be strictly followed, which includes forbearing from Smoking or using Alcohol during the recovery period, improving Quality Sleep, having nutritious food, Using the right Piercing Aftercare Products, the Frequency of Cleanings, and so on.

It must be ensured that, before touching the Piercings, the client cleans the hands with antibacterial hand-wash. The piercing must be kept dry. Cleaning must be done with a saline solution. The sleeping position must be adjusted to avoid irritation to the piercing. Care must be taken while changing clothes to avoid irritating the piercing. Proper guidelines must be followed diligently.

The Kiss Of The Vampire

The recent jump in the interest of the younger generation can, however, be largely attributed to the Twilight hype. The Twilight series of, first Movies, then Books, then Comics and Animation and finally Online Games, seems to have created a resurgence of the old Vampire Mania. The Twilight Saga has stood the test of time in the last decade.

The latest Twilight movie, Breaking Dawn Part II has stepped up the hysteria by a few notches and with it a demand for the Vampire’s Kiss. Vampire Bites Piercing has reached an all-time high and is expected to go up even further.

Not limited to gender, these Neck Piercings fascinate both the guys and the girls. Similar Surface Piercings can be done anywhere on the body where the skin is not exceptionally tight or taut. They are commonly done on the back of the neck, and are then called ‘Nape Piercing’. Even the older generation is now going mad over these Vampire Bite piercings, and they are the style icons at this point.

A Vampire Bite piercing, once done correctly and cared for as guided by the Piercer, can last for many years if not disturbed. This is a look that makes both sexes look flamboyantly fashionable. Starting from the USA, where the Twilight Saga first created a tsunami and started the rage, these piercings have now spread all over the world. Particularly in the affluent southeast Asian countries, all successful people sport Vampire Bites as a token of their success. The Vampire bite Look is here to stay.

An Easy Guide To How To Use Tattoo Transfer Paper
Next Post: Decorative Dental Piercing

You can also find other in-depth reviews and buyer’s guides on the Best Tattoo Needles, Best Tattoo Foot Pedals & Switches, Best Gifts for Tattoo Artist, Best Drugstore Makeup to Cover Tattoos, and Best Airbrush Makeup in the Beauty & Personal Care category where we provide you the handpicked list of top-rated products on the market.

The Guyletatooer.com is a participant in the Amazon Services LLC Associates Program, an affiliate advertising program designed to provide a means for sites to earn advertising fees by advertising and linking to Amazon.com. If you like our reviews and decide to purchase one of the items we have featured, we may be compensated.